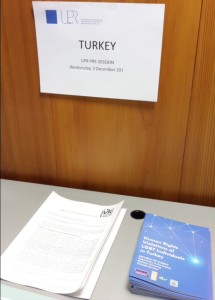 Briefing paper regarding the UPR of Turkey
December 2014

Turkey is the last country in the Council of Europe area to recognise conscientious objection to military service. Conscientious objectors face the possibility of a life-long cycle of prosecutions and imprisonment, and a situation of “civil death” which excludes them from the normal social, cultural and economic life.